Honeybees turn on the heat when temperatures drop

In the summertime, bears can be a big pain in the stinger for honeybees. They’ll tear apart an entire hive in search of honey, the golden cure for their sweet tooth craving.

But, in the winter, honeybees get a reprieve while bears hibernate. And while honeybees don’t hibernate, they do hunker down inside their hives for the season. However, there’s no time for sleeping – their “busy as a bee” maxim rings true year-round.

No rest for the weary

For honeybees kept by commercial beekeepers, like those of the Sioux Honey Co-op, they are often shipped to cold storage facilities or warmer climates (Texas, Florida, etc.) after beekeepers finish with the August harvest of honey.

In cold storage (potato sheds are ideal, for example), bees stay dormant, which helps them build strength and body fat. Plus, the bees are broodless, which means the queen can get a rest because she isn’t constantly laying eggs. The cool temps also help kill off hive pests like varroa mites, which can’t live if they don’t have new brood to eat.

In warmer climates, honeybees can also rest and build up strength because, if you’re a honeybee that belongs to a commercial beekeeper in the U.S., chances are your downtime lasts from September to December, and then it’s time to travel to California for the almond pollination season, which lasts from late-January to mid-March.

For the honeybees that remain outdoors in the winter climates, whether commercially kept or feral, they head inside their hives when the temps get below 50 degrees. Their number one job: Keep the queen warm. Really warm.

Honeybees inside the hive – only the queen and female worker bees remain at this point; the male drones have been kicked to the curb – form circle clusters with the queen at the center. To generate heat, the ring of honeybees closest to the queen shiver, and then use their wings to fan the heat to the center. As they fatigue, the rings rotate and the inner ring of bees moves to the outer ring.

At the center, temperatures reach a toasty 95 degrees. The outer-most ring stays at about 50 to 60 degrees. Honeybees eat stored honey for food and the queen takes the winter off from laying eggs (queens lay about 2,000 eggs each day in the summer) so that the hive can maintain its food source.

Compared to summer honeybees, winter bees have larger hypopharyngeal glands and more fat body reserves. Their different physiological characteristics from those of the summer population make them more plump and able to keep up the heat.

Winter bees also have a longer lifespan and can live through the winter (about three to four months). That’s because they spend most of their time inside the hive, whereas summer bees devote their days to flying several miles back and forth daily between nectar sources and the hive. Summer bees literally work themselves to death and live only about six weeks.

The photograph above is a thermal image of a hive in the winter. Using thermal imaging – the process of converting infrared radiation into visible images that depict the special distribution of temperature differences seen through the camera’s viewfinder – we can see how the center of the bee ring cluster is the warmest, and how the temperature cools as it gets farther from the center.

In the center of the red section is where you’ll find the queen bee, all nice and toasty warm. (Outside the frame of the photo, way off in the distance nestled inside a cave on the side of a hill, is that bear. And, hopefully, this healthy hive can escape his claws when he awakes in a few weeks.) 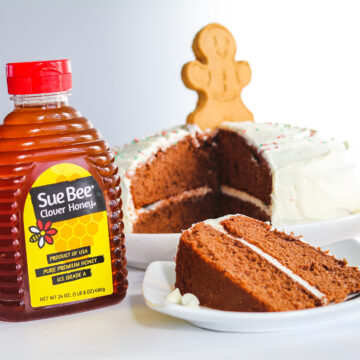