Idaho Beekeepers Featured In ‘Who Does Your Honey Come From’ Drive

Two Idaho beekeepers are being featured in a national drive for Americans to know who their honey comes from. Amongst its 200+ members, Sioux Honey Association Co-op selected Bob and Michael Newswander of Preston to be faces of the “Who Does Your Honey Come From” campaign, which started December 17, 2018 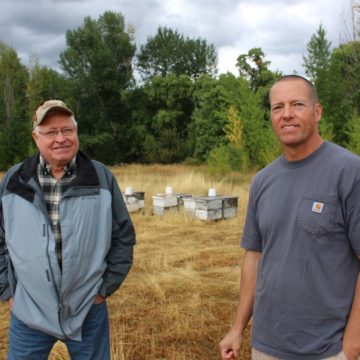 “It’s not just where your honey comes from that matters. It’s who,” said Rob Buhmann, chair of the Sioux Honey Board. “Sioux Honey comes from people like the Newswanders who are producing top-notch Idaho honey. These families are running solid operations and they are committed to making only the highest quality product.”

“Our philosophy is to give the bees all of our attention,” Bob Newswander said.

Bob operates Newswander Apiaries along with his son Michael who quit his engineering job to join the family business. His family joined the co-op in 1970 to get their honey to the market and allow them to focus on taking care of the bees.

Both Bob and Michael appear in the middle of the nationwide ad which highlights the challenges of beekeeping and the persevering nature of America’s beekeepers.

“There’s nothing like working for yourself and dealing with a wonderful creation of nature,” Michael Newswander said. “I don’t know what’s better than being outside digging in a beehive, building beehives, pulling the honey off at the end of the year.”

Newswander Apiaries manages 8,000+ beehives that are spread out across southeastern Idaho and northern Utah, with their base of operations in Preston, Idaho, in the Cache Valley.