Bust A Move: The Waggle Dance

The curtains open and the honeybee takes its place on stage and begins the performance. Worker bees gather to watch the waggle dance. It is an important act to perform since dancing is how honeybees communicate. And this bee is fresh from finding a nectar source.

Excellent communication, or amazing dance moves, among colony members results in a healthier and more productive hive. In addition to dancing, honeybees communicate by chemical signals, also known as pheromones, released into the air by glands on their abdomen. Each pheromone has a specific meaning for communication. 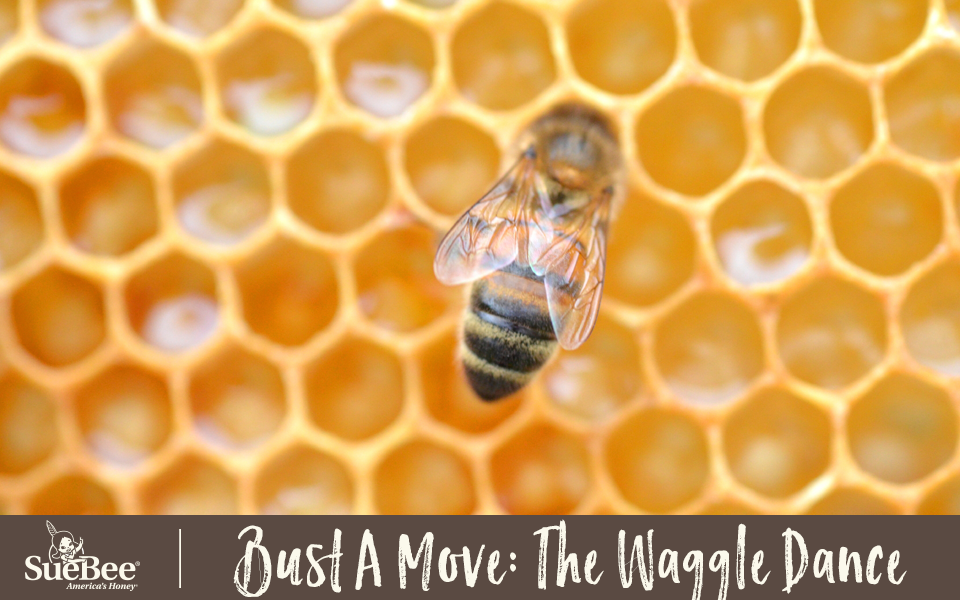 The waggle dance uses a combination of physical moves and pheromones. It’s one of many distinct communication behaviors that are performed in the hive. Four pheromones are released during the dance. While the purpose is still unclear, researchers believe it draws in a larger audience to the dance floor, which results in more honeybees sent to the source.

The dance consists of one to 100 or more circuits, each containing two phases: the waggle phase and the return phase. The complete waggle dance takes the basic pattern of a figure 8.

Honeybees execute the dance when it wants to inform the hive of a new nectar source. Bees will not waste valuable time and energy searching for food if they don’t need to.

The waggle takes place at a special site located near the entrance of the hive, which enables quick entry and exit of worker bees. The featured dancers are only those with news of highly profitable sources of nectar.

The Choreography
The dance starts with the waggle phase, which is characterized by a run through the center of a figure 8 pattern with a side-to-side wiggle of the bee’s abdomen. Worker bees learn two important pieces of information from the dance: the distance to the nectar source and the quality of the nectar.

The length of this first phase indicates the distance from the hive to the food source ­– the shorter the waggle, the closer the nectar source.

The intensity of the wiggle reveals the quality of the nectar – the more rapid the waggle, the higher quality.

In addition to this, the waggle phase also tells the location of the food source. If the run goes in an upward direction on the vertical section of the honeycomb in the hive, the nectar source is directly in line with the sun. Any run performed at an angle off the vertical section indicates that the source will be found at a similar angle off of the location on the sun. If a waggle run goes 90 degrees to the right of the vertical, this means the source is 90 degrees to the right of the sun’s position outside the hive’s entrance.

The second phase of this performance returns the honeybee back to the beginning of the waggle phase, where the dance is repeated. This phase takes place in the loops of the figure 8 pattern.

Dance Battle
At times, honeybees will compete – as in a dance battle – for the attention of their peers for the location of their found nectar source. The result? Extremely exhausting dancing, and very intense waggling. The competing dancers may event disrupt each others’ dances or fight each other.

Aside from the waggle, honeybees also have two other dances they use to communicate for swarming and grooming.

Learn More
Can’t get enough of the waggle? Then watch the video below from Georgia Tech College of Computing that details the findings of Austrian biologist, Karl Von Frisch, who famously devised an experiment to find out how honeybees communicate the locations of new food sources. The video details the design of Von Frisch’s experiment and explains the precise grammar of the honeybees dance language with high quality visualizations.