Minnesota Beekeeper Featured In ‘Who Does Your Honey Come From’ Drive

A Minnesota beekeeper is being featured in a national drive for Americans to know who their honey comes from. Amongst its 200+ members, Sioux Honey Association Co-op selected Darrel Rufer of Waverly to be a face of the “Who Does Your Honey Come From” campaign, which started December 17, 2018. 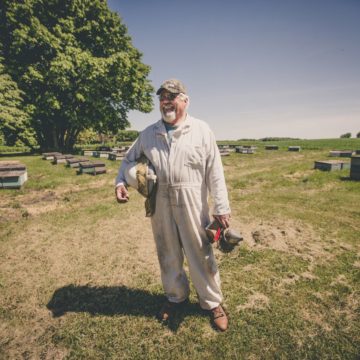 “It’s not just where your honey comes from that matters. It’s who,” said Rob Buhmann, chair of the Sioux Honey Board. “Sioux Honey comes from beekeepers like Darrel Rufer who are producing top-notch Minnesota honey. These families are running solid operations and they are committed to making only the highest quality product.”

“Sue Bee is synonymous with quality and with values, high values,” Rufer said. “I know a lot of Sioux Honey members, and they’re all the same. It’s not about seeing how much money you can make, or how fast. Beekeeping is not big agriculture. Beekeeping is big families. A lot of brothers, sons, dads, grandfathers. That’s why it’s a generational thing. It’s a lifestyle.”

Rufer appears at the beginning of the nationwide ad which highlights the challenges of beekeeping and the persevering nature of America’s beekeepers.

Rufer previously worked as a chef at a fine-dining restaurant in Minneapolis. After finishing a midday lunch rush on a day in 1977, Rufer took home a swarm of bees he found hanging on a tree outside of the restaurant. That first hive grew to a hobby which then became a commercial venture in less than a year. Today, Rufer’s Apiaries, Inc. is among the top honey producers in the Sioux Honey Co-Op, with more than 5,500 colonies of honeybees in Minnesota and South Dakota.